Carbon Nation is a documentary film about climate change SOLUTIONS. Even if you doubt the severity of the impact of climate change or just don't buy it at all, this is still a compelling and relevant film that illustrates how SOLUTIONS to climate change also address other social, economic and national security issues. We meet a host of entertaining and endearing characters along the way.

Those same words can be used for the film itself.

Byck and crew merit praise for many reasons, but lets start with their (partial) interview list (and, not listed on the page, the much longer 'consulted'/talked with list which goes on for a long time at the end of the film). This list reads like a Who's Who of top-notch people who understand the challenges before us and offer viable (opportunity seizing) solution paths. These include Ed Mazria (Architecture 2030) , Joe Romm (Climate Progress), Lester Brown (Plan B 4.o), Dennis Hayes (Earth Day), Van Jones (founder of Green for All), Bob Fox (architect), Joel Makower, Peter Barnes (Capitalism 3.0 (Cap and Dividend)), multiple people from the Rodale Institute, and so on ... If this film's list of interview and assistance credits could be truly driving our paths forward, we could sleep far sounder at night about our economic, energy, and environmental future. 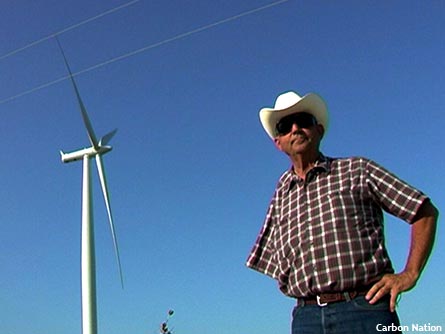 Cliff Etheredge in Carbon Nation
The presentation style, with engaging graphics, accurate but not overwhelming information, and sprinkling of laugh-out loud humor make this a truly "entertaining" documentary. Some of the humor comes from the interviewees (perhaps 30 minutes of the film -- out of several hundreds of interview footage) but the humor definitely represents the film's team and authors approach: without a note of levity, how can one survive making a film about Global Warming? For example, when providing basic background about Global Warming, the narrator pointed out that

We've had about the same temperature for 10,000 years, the time period in which all modern human civilization developed ... farming, pinatas, and frequent-flier miles.

It is an endearing film, in no small part because of the interviewees. The first solution explored, wind power, works from an interview with one-armed Texan cotton farmer Cliff Etheredge who has become a wind entrepreneur and helped make hundreds of his neighbors wind farmers. They are not just producing clean energy but also rejuvenating their home town of Roscoe, Texas -- which had even lost its Dairy Queen. Some 400 landowners are now getting royalty payments which can reach up to $15,000 per turbine per year while still able to use most of their land for agriculture. Among his quotable lines, when discussing their strong winds, "what we've been cussing all these years is a blessing." (Preview clips, including this interview.)

And, Carbon Nation takes viewers through the key solutions sets (types of renewable energy, energy efficiency, land use changes (both in protecting rain forests and changing farming) while providing key information in digestible amounts in ways that people can remember.

The film lays out the seriousness of our challenges but provides an optimistic perspective on the benefits if we choose to talk the challenges seriously.

Some items from notes taken during the premiere:

This film does not suggest that there is "a solution", but exposes us to a web of solutions. And, each of them is discussed in a way that enables understanding that they are part of a system, with multiple implications of the action.

In the question and answer session, Byck stated that the "huge nut that opened early in the production is that you don't have to believe in global warming to do these things. If it is about saving money, clean water and air, national security, a moral or ethical religious imperative, there are so many good reasons to be doing these."

Starting out from a very pessimistic beginning of how serious our challenges are, this is a fundamentally optimistic film about possibilities for actual solutions. In introducing the film, Byck introduced three babies (including his own) conceived/born to Carbon Nation's team during the three-year odyssey from conception to premiere.

It is pretty hopeful that we can have three babies while studying Global warming.

Let me say, this is not just a film worth seeing, but it is one that is well worth sharing -- as widely as possible. While there are tentative plans for some theater showings, it is just a $10 DVD which you can preorder here. A strong recommend: get it, watch it, and share with friends and colleagues.

There are no comments posted here yet